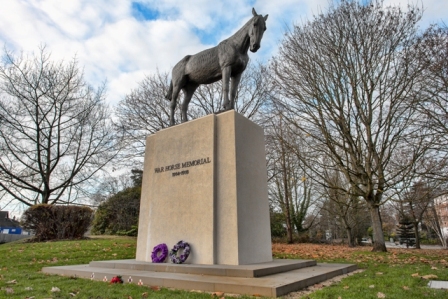 On the 8th June 2018 A memorial to war horses that lost their lives during World War One has been unveiled near Ascot racecourse.

The prime minister were among those who sent messages of support for the statue, designed by Susan Leyland.

The ceremony was attended by representatives from Canada, Australia, New Zealand, America and France.

Horses and soldiers dressed in World War One uniform and kit joined trumpeters from the Household Cavalry Band to mark the occasion.

Theresa May said that she "recognised the importance of animals in warfare and the memorial... will remind many more people that we should never forget the part that animals played."

The War Horse Memorial team said millions of UK, Allied and Commonwealth horses, donkeys and mules had helped the war effort and lost their lives.

The memorial has taken more than four years to complete, with the £300,000 cost of the statue paid for by funding from both public and private donations.

Organisers said the statue is a visual part of an "ongoing fundraising campaign to support military and equine charities".

The bronze sculpture of a horse - emaciated, head bowed in sorrow for fallen comrades, with a tangle of barbed wire lying at its hooves - was designed by sculptor Susan Leyland and will appear on the Heatherwood roundabout close to the famous racetrack.

It has been christened "Poppy" after the name proved the winning entry in a competition organised by Britain's Brownies and Guides.