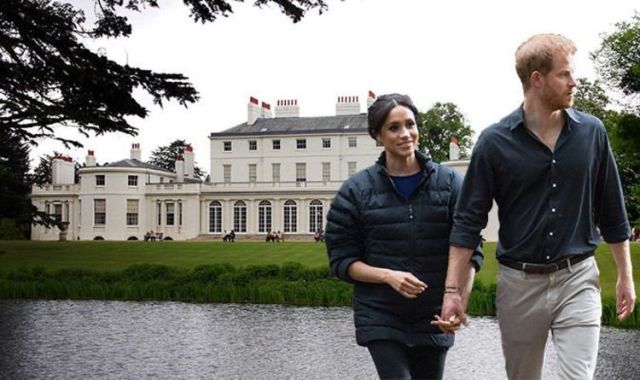 The vegan paint, sourced from eco-friendly paint supplier The Organic & Natural Paint Co, is child-friendly and not tested on animals.

With their move to Frogmore Cottage on the horizon, the Duke and Duchess of Sussex's preparations for their new family home are underway — and the pair are understood to be making environmentally friendly décor choices.

Not only have they installed a £50,000 green boiler in their new home, but Prince Harry and Meghan Markle are also using a vegan paint brand to decorate their baby's nursery, according to the Sun.
Meghan is a well-known animal lover and is a patron of Mayhew animal welfare centre in London, which she visited last week.

As well as being cruelty-free, the Auro paint, supplied by The Organic & Natural Paint Co, is also non-toxic and eco-friendly.

What is vegan paint and where to find it?

Some house paints use casein — a protein derived from milk — or beeswax as a binding agent, while many use ingredients that have been tested on animals.

Vegan paints avoid these products and do not use animal testing.

The Organic & Natural Paint Co was set up by father-of-two Chris Ridley in 2012, after he researched which paints would not aggravate his family's asthma.

Using non-toxic paint is a popular choice for parents-to-be who are often worried about Volatile Organic Compounds (VOCs).

Ridley says that VOCs are released into the air as the paint dries and can trigger allergies such as asthma.

Auro's wall paint is vegan and safe for children.
“It’s the only brand I wanted to use myself, because of my own children’s breathing difficulties. Natural paints can change the lives of people with these allergies.”

How will Frogmore Cottage be decorated?

Meghan is understood to have chosen a gender-neutral colour scheme for the nursery.
It is believed she has employed the services of celebrity interior designer Vicky Charles.
Charles, who worked for Soho House for 20 years, has previously styled Soho Farmhouse and The Ned.

Soho Farmhouse: Meghan has reportedly appointed interior designer Vicky Charles to decorate
The rustic-look Soho Farmhouse, a favourite location of the Duchess, was the setting of her three-day hen do in 2018.

It is on the same Cotswolds estate as Harry and Meghan's countryside bolthole.
Kensington Palace declined to comment on the Duchess’s plans.